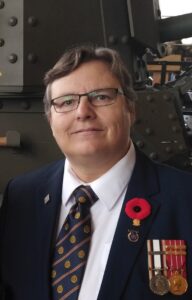 Ruby Brydges was born in 1964 in Regina and was raised in Brandon. She graduated from the University of Winnipeg in 1992 with a Bachelor of Arts degree in Administrative Studies, and an Advanced Diploma in Forensic Accounting and Fraud Investigation from the Vancouver Island University and holds a designation as a Certified Forensic Investigator.

Ruby joined #2520 RCACC in Brandon, MB in 1978 and finished her Cadet career at the rank of Cadet Lieutenant. During this time, she was selected as the Colonel Magnacca Sword winner in 1981. She also received many awards throughout her Cadet career for leadership, community service and marksmanship. She joined the Primary Reserve in 1981 as a musician with 26th Field Regiment Pipes and Drums, changed trades in 1987 to Administration Clerk and subsequently to RMS Clerk upon amalgamation in 1997. After various administrative positions within the unit, Ruby was offered a Commissioning from the Ranks (CFR). Upon commissioning, she was offered a full-time position as Base Adjutant in CFB Shilo. During this time she attended the Logistics Finance Specialty course and finished as Outstanding Graduate. Throughout her Reserve career, Ruby continued working within the Cadet program by teaching at the Corps that were affiliated with 26th Field Regiment. This included #19 RCACC Portage la Prairie, #2520 RCACC Brandon and #2528 RCACC Virden. Her specialty was teaching Leadership star levels, and First Aid training

In 2001, Ruby transferred to the Regular Force and attended her Second Language Training in St. Jean, PQ (current language profile of B-A-B). She has completed her Logistics Phase 3 and 4, her Advanced Logistics Course and the OPME program from RMC. Ruby was posted to serve at the Base levels, Division HQ level and NDHQ. Here she honed her skills as a Finance Officer and provided advice to the League on general financial administration.

In 1993, Ruby joined the Army Cadet League of Canada (Manitoba), was a Director for many years and served on the Insurance and Honours & Awards Committees at the national level. Upon her transfer to the Regular Force, Ruby still remained in the League and transferred to the Alberta Branch. Here she was the Secretary/Treasurer for the North and Central Zones. Upon posting back to Manitoba, she transferred once again to that Branch as a Director. During this tenure, Ruby was deployed to Afghanistan from February to August 2006 on Operation ARCHER, ROTO 1, and missed the AGM that year. The following year, however, she made a presentation to the membership of what her job entailed and provided some pictures for reference. Then Ruby was on the move again and was posted back to Alberta, served as the Vice President on the National Council. When Ruby was posted to Ottawa, she became a Member at Large. In 2012, the Budget Committee was stood up, and Ruby became a member to assist in bringing things back to a new normal and provide transparency. In 2013, Ruby was elected as the Treasurer on the Executive Committee and has continued in this post until 2019. She also continues to serve on the League Costing Working Group in order to provide representation to CJCR on the League’s financial contributions to the overall program.

Ruby Brydges resides in Medicine Hat with her husband Tom (retired from the Artillery), and enjoys being an active member of the South Alberta Pipes and Drums. They have one child together, Darrah (24) and two from Tom’s first marriage with five grandchildren and three great-grandchildren.