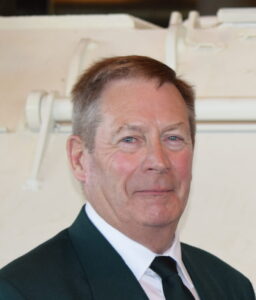 Colonel Fletcher is a native of Fort William Ontario.  He is married to the former Darlene Ford of Maple Creek, Saskatchewan.  They have two children, a son, Bill, a serving officer in the PPCLI and a daughter, Heather, an Athletic Therapist in Red Deer, Alberta.

Col Fletcher’s military experience began with his joining 2294 RCACC in Fort William.  This led to his enrollment in the Canadian Army (Militia) as a gunner in 118 Medium Battery in 1960.  He was subsequently commissioned into the Canadian Army (Regular) Royal Canadian Army Service Corps in 1963 on completion of the Officer Candidate Program.

Colonel Fletcher was employed in a variety of positions as a junior officer including a 7 month tour as Movement Control Officer in Cyprus in 1970/71.  On his return from Cyprus he was posted to the Canadian Airborne Regiment as the Regimental Logistics Officer.

Promoted Major in 1974, Colonel Fletcher assumed command of Supply and Transport Company, 4 Service Battalion Lahr Germany.  In 1976, he assumed the appointment of Staff Officer Transport/Base Transport Officer in Lahr.  In 1977, he joined the Canadian Airborne Centre, Edmonton as the Officer Commanding the Air Logistics Support Training Wing.  This was followed by a posting to 1 Service Battalion, Calgary as Deputy Commanding Officer.  In 1981, he attended the Canadian Forces Command and Staff College, following which he was promoted Lieutenant–Colonel and posted to the Director General Transportation Division in Ottawa as the Personnel Transportation Policy and Operations Section Head.

Colonel Fletcher assumed command of 4 Service Battalion, Germany, in 1984, a highlight of his career.  He left command in 1986 upon posting as a member of the Directing Staff and the Canadian Forces Land Command and Staff college Kinston a position he held until 1989.This was followed by a series of postings within National Defence Headquarters, as a program analyst with the Chief of Program,  Deputy Director National Defence Headquarters Secretariat, and  Director of Movements.  He was inducted into the Order of Military Merit in the grade of Officer in 1992, and was promoted Colonel in 1993.

Colonel Fletcher was appointed Director General Transportation in 1994, a position he held until joining the UNAMIR Headquarters staff in 1995 as DCOS Support and ultimately Chief of Staff and Commander of the Canadian Contingent Rwanda.

Upon his return to Canada in 1996, he commenced responsibilities for the review of Operational Logistics Planning and Coordination, interrupted by his assignment as MNFJ4 to OPERATION ASSURANCE, the Canadian led relief mission to Zaire.  On returning to Canada, Colonel Fletcher conducted a review of the concept of operations of Reserve Service Battalions which he completed prior to his retirement in 1997.

Colonel Fletcher undertook a number of initiatives subsequent to leaving the CF.  He worked with then ATCO Frontec in support of the CF in Bosnia Herzegovina, supported St. John Ambulance as the Central Alberta Manager and formed his own consulting business which he operated until 2013.