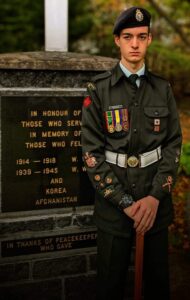 (Ottawa)- October 2022 – The Army Cadet League of Canada (ACLC), the Royal Canadian Legion (RCL) Dominion Command are pleased to announce that Canada’s outstanding Army Cadet and recipient of the 2022 General Walsh Commemorative Sword is Cadet Chief Warrant Officer Jake Reeves, from Lake Echo, NS and member of the 2741 Eastern Shore, Royal Canadian Army Cadet Corps. An official award presentation ceremony will be organized by the Nova Scotia Branch of the ACLC at an appropriate time.

As a recipient of the Royal Canadian Legion Cadet Medal of Excellence, in 2021, Cadet Reeves was promoted to the rank of Cadet Chief Warrant Officer rank and presented the highly coveted Lord Strathcona medal this past May.  Cadet Reeves is also a recipient the Army Cadet Service Medal.  As a high achiever within the cadet program, he was a gold medal finalist for the 2021 Cadet Games and is a member of his unit’s biathlon team.  Cadet Reeves is also often recognized at his corps for his outstanding leadership and was recently presented the Shearwater Cadet Commanding Trophy & the Dixon Trophy for Best All Round Senior Cadet.

As he completed the Master Cadet training level, Cadet Reeves exceeded the evaluation standards in the community service, leadership, personal fitness & healthy living, and instructional techniques categories. He was also appointed Regimental Sergeant Major for his corps in 2021.

“CWO Reeves always goes above and beyond, he leads by example and many people find his enthusiasm and dedication both inspiring and motivating. His tremendous work ethic and perseverance will guide him to accomplish many great things in life,” says his CO, Capt Shannon Jarvis, CD, of cadet’s Reeves performance at the corps.

As the recipient of the Walsh Memorial Sword and the COVID restrictions lifted, Reeves will travel to Ottawa, as the guest of the Royal Canadian Legion and to represent Army Cadets from across the country to attend the November 11th Remembrance Day ceremony at the National War Memorial, as part of the Vice-Regal party.  Following the ceremony, he will also have the opportunity to meet both the Governor General and the Chief of the Defence Staff at the Luncheon for the Silver Cross Mother hosted by the Governor General at Rideau Hall.

Cadet Reeves has demonstrated all the attributes of a well-rounded individual, which is the essence of this award and recognition.  As part of the responsibilities of receiving this title and award, he could  be called upon, from time to time, to represent Army Cadets in some events throughout this upcoming 2022-2023 cadet training year.

For more information about this award and other ACLC awards and scholarship opportunities, visit: https://www.armycadetleague.ca/awards-grants-and-bursaries/