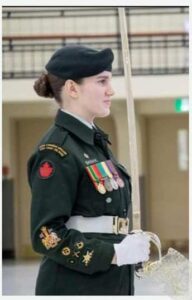 As the recipient of this bursary, Cadet Breckenridge will be awarded a sum of $5000 to help cover the costs of tuition while attending Laurentian University. She is currently planning to pursue her post-secondary studies as one of the 40 applicants accepted in the University’s Forensic Science program to become a forensic scientist in a crime lab or a forensic police officer.

Cassandra enrolled as an Army Cadet in 2014 and has since excelled in various facets of the Program. As a distinguished markswoman, she competed in a couple of National Biathlon competitions and further qualified to take part of the National Rifle team in 2019.  She also participated in the International Army Cadet Expedition to Santa Catalina Island, California earlier this year. As an Army Cadet she also qualified for the Gold level of the Duke of Edinburgh program and is the recipient several Cadet medals such as the Royal Canadian Legion Cadet Medal of Excellence, the Lord Strathcona Medal, the Major-General Howard Medal and the Army Cadet Service Medal.  She is also the recipient of the Canada Company Bursary and several other awards and recognitions. Outside of cadets, Cassandra is a well-rounded individual who has always excelled academically. With her high marks, she qualified as a Loran Scholarship Semi Finalist.  She is also an avid athlete and has been involved in various school programs and with her community.  With these outstanding credentials, Cassandra clearly meets the high standard requirements for this bursary.

About the Buckley-Macdonald Youth Fund Bursary

The Buckley-MacDonald Youth Fund has been a long-time supporter of Youth Based programs including The Royal Canadian Army Cadets, supporting Corps across Canada, and the Blackdown Cadet Training Centre. In addition, several youth-based charities and youth-focused services have received grants across Canada including, YMCA Simcoe Muskoka, Home Horizons, Theatre Collingwood and its Youth Drama Camps, The Blue Mountain Village Foundation, Saugeen Memorial Hospital and Collingwood Marine and Midland Hospital.

In early April, in light of the COVID-19 pandemic and the financial uncertainty youth have towards making September tuition payments, Mr. Gerard Buckley and Ms. Mary MacDonald graciously decided to award a special post-secondary bursary to a deserving Army Cadet through the Buckley-MacDonald Youth Fund and The Army Cadet League of Canada.

“The Army Cadet program’s existence is imperative to our Canadian culture and teaching youth our shared values. It is only fitting that the Buckley-MacDonald Youth Fund supports tomorrow’s leaders, today,” states Mrs. Mary MacDonald.

We congratulate C/CWO Breckenridge and wish her the best of luck with her studies and future plans.

Click here for a copy of the News Release