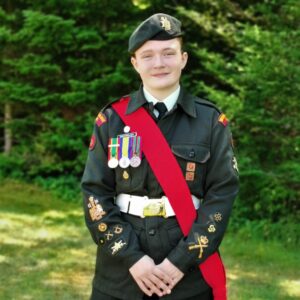 The Army Cadet League of Canada (ACLC), the Royal Canadian Legion, Dominion Command and the Commander National Cadet & Junior Canadian Ranger Support Group are pleased to announce that Canada’s outstanding Army Cadet and recipient of the 2020 General Walsh Commemorative Sword is Cadet Chief Warrant Officer (CWO) Sara Lynn Greenough of Bridgewater, NS and member of the 2688 Bridgewater Kinsmen, Royal Canadian Army Cadet Corps.  An official award presentation ceremony will be organized by the Nova Scotia Branch of the ACLC at an appropriate time.

Cadet Greenough C/CWO Greenough is a recipient of the Royal Canadian Legion Cadet Medal of Excellence, the Lord Strathcona medal and Army Cadet Service Medal.  She is a distinguished markswoman and has participated in both, biathlon and the National Expedition Program.  While she excels academically, Sara Lynn is also a remarkable musician, a talented athlete and is heavily active in her community.

“CWO Greenough is not just a superstar as an Army Cadet but she has mastered a wide and varied range of life skills”, says Captain Barteaux, her Commanding officer. “She is focused on excellence and strives to be the best she can be while keeping a compassionate and caring eye open for those whom she can assist along the journey”, he adds.

“On behalf of The Royal Canadian Legion I commend Sara for her superior skills and attitude, which resulted in this award and will help her forge an amazing path into the future,” says Dominion President Thomas D. Irvine, CD. “Young cadets such as Sara serve as a true inspiration to others.”

Under normal circumstances, the recipient of this award would travel to Ottawa, as the guest of the Royal Canadian Legion and to represent Army Cadets from across the country to attend the November 11th Remembrance Day ceremony at the National War Memorial, as part of the Vice-Regal party.  Unfortunately, due to COVID-19, and the travel restrictions for cadets, this will not be possible.

We congratulate Cadet Greenough for this exceptional accomplishment.

Click here for a copy of the News Release