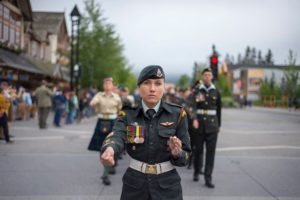 Canada’s outstanding Army Cadet and recipient of the 2019 General Walsh Commemorative Sword is Cadet Chief Warrant Officer (CWO) Evelyn Wrobel, from Springwater, Ontario and member of the 2919 Grey & Simcoe Foresters Royal Canadian Army Cadet Corps at the time of the official announcement.  A formal presentation ceremony took place at the corps to present Cadet Wrobel the Walsh commemorative sword this past October.  Members and President of the ACLC Ontario office, Mr. Gerard Buckley, and members of Cadet Wrobel’s family were in attendance.

The General Walsh Memorial Sword is the highest national prize for any Army Cadet. The award was created by the Army Cadet League of Canada in partnership with Royal Canadian Legion, and named in honour of Lieutenant General Geoffrey Walsh, CBE, DSO, CD, who dedicated much of his time to the Army Cadet Program. Recipients of the award are chosen not only based on their performance as Army cadets but also for their community involvement and their academic standings.  In 2004, The Royal Canadian Legion (Legion) established an award for “Outstanding Cadets” selected from each of the three cadet elements, Sea, Army and Air.  These cadets would attend the National Remembrance Day ceremony in Ottawa as part of the Vice-Regal party.  In 2005, it was decided to combine the two awards.

Cadet Wrobel is a recipient of the Major-General Howard Medal, the Lord Strathcona Medal, the Royal Canadian Legion Cadet Medal of Excellence and the Army Cadet Service Medal.  In 2018, she graduated the Canadian Armed Forces Basic Parachutist’s course and was a recipient of the Brigadier-General Romses “Top Jumper Award”.  That same year, she was one of 18 Army Cadets to be selected nationally to attend the National Expedition Mount Columbia.  In April 2019, she was named recipient of the Young Citizen’s Foundation scholarship and in June, she was one of only two Army Cadets to represent Canada at the Junior Reserve Officer Training Corps’ Junior Leadership and Academic Bowl in Washington, DC.  This summer she is employed at Rocky Mountain Cadet Training Centre as the Cadet Regimental Sergeant Major.

As the recipient of the Walsh Memorial Sword, Wrobel will travel to Ottawa, as the guest of the Royal Canadian Legion and to represent Army Cadets from across the country to attend the November 11th Remembrance Day ceremony at the National War Memorial, as part of the Vice-Regal party.  Following the ceremony, she will also have the opportunity to meet both the Governor General and the Chief of the Defence Staff at the Luncheon for the Silver Cross Mother hosted by the Governor General at Rideau Hall.

“We salute Evelyn for her exemplary record and look forward to welcoming her as part of our national commemoration this November,” says Royal Canadian Legion Dominion President. “She serves as an amazing role model for cadets and youth across our country.”